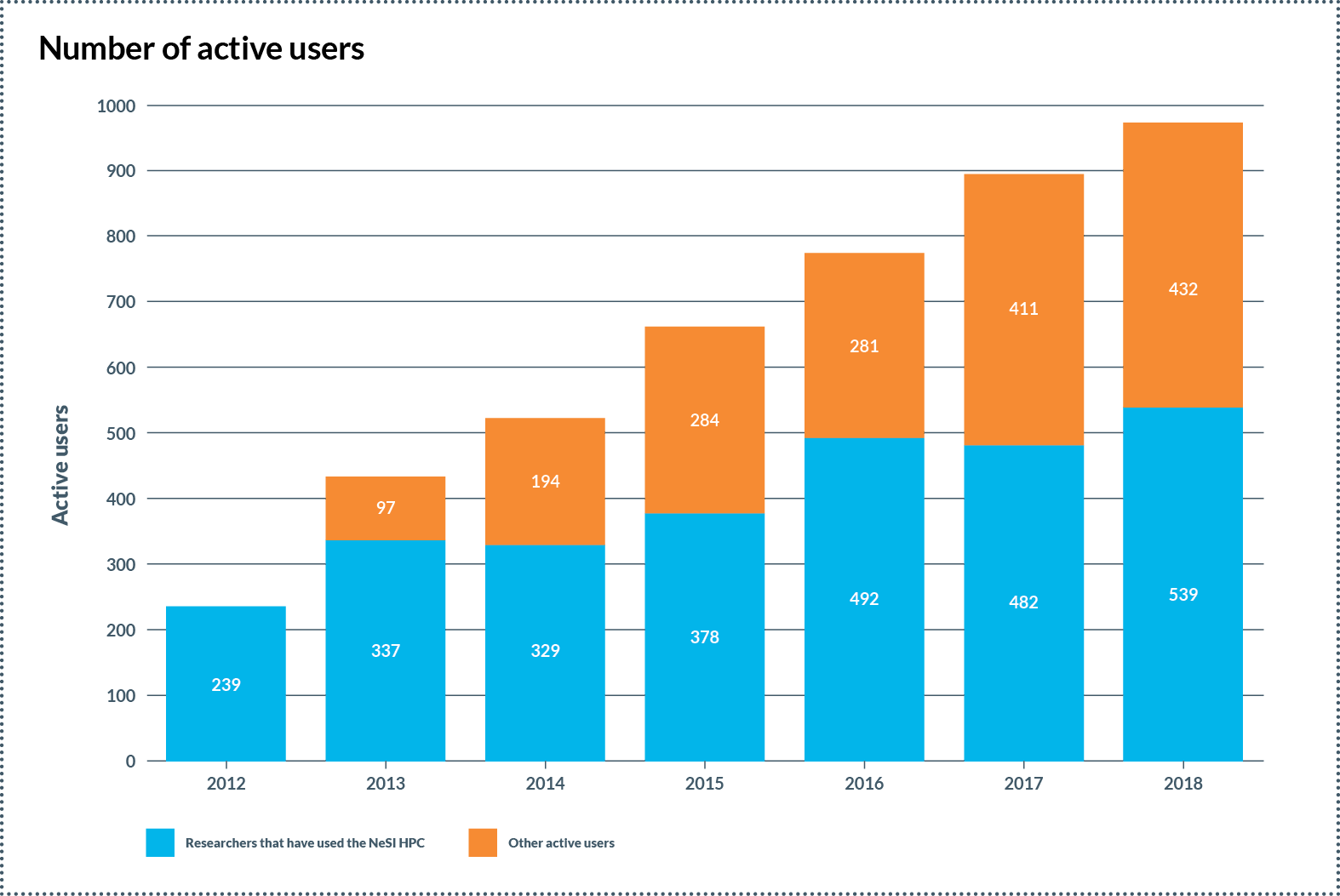 NeSI has seen a continued year-on-year increase of users on our platforms. This trend is true for users actively submitting compute jobs, as well as users accessing the system for peripheral uses such as contributing raw data and accessing the output data.

Although there is growth in our user base, particularly with our new platforms, there is still room for greater uptake of our services. Through recruitment of our Research Communities Advisor and specialist support team members in engineering and genomics, we are looking to create greater awareness and support of NeSI’s services across New Zealand’s research sector.

NeSI has contributed a broad range of new local and international initiatives to the research sector during 2018, including:

“NeSI Staff provide tremendous support in software maintenance and general ‘assurance that things are done well’, which is difficult to attain by individual researchers.”
Klaus Lehnert, University of Auckland

During the current contract NeSI has established a successful training programme, including a key lever to scale its benefits through focusing on train-the-trainer. NeSI has matured its approach to research software engineering, with a well subscribed and recognised consultancy offering which lifts computational capabilities of research teams. Lastly, NeSI’s researcher support for access to and use of its infrastructure is highly valued by researchers, consistently receiving high praise for responsiveness and expert support.

“It was great working with NeSI... The new code implemented is much faster and runs more efficient on NeSI platforms. Thanks to continuous collaboration along the code building, I am now able to maintain and develop it on my own. I learnt a lot from this project and I am really glad that NeSI offers us this kind of expertise for long-term projects that require a lot of work.”David Coppin, University of Auckland 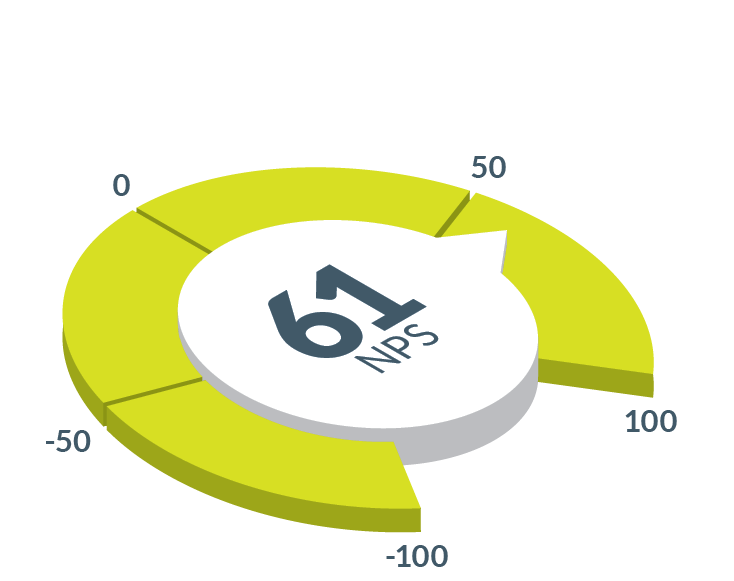 Of all projects surveyed that had allocations ending in 2018, we had 238 responses to the question, “Did your project receive significant benefit from using NeSI?”. Of those responses, 87% responded positively that their research project received significant benefit from using NeSI. Of the remaining responses, 20 were neutral, 5 disagreed and 5 strongly disagreed. Reasons given for these responses often refer to NeSI not actually being used as anticipated due to other available resources or timing. NeSI’s routine project survey, shared with researchers at the end of a project with NeSI, asks whether they would recommend NeSI’s services.

Based on our survey results to date, NeSI has maintained a Net Promoter Score (NPS) of 61. This is a very high score – any positive score is seen as good, with scores between +50 to +80 seen as high performing. This shows that NeSI has loyalty and satisfaction from its user base.

Looking at the change in our NPS score over time, it is consistently high, with perhaps a slight drop off in 2018 due to issues some users experienced during the migration between platforms. 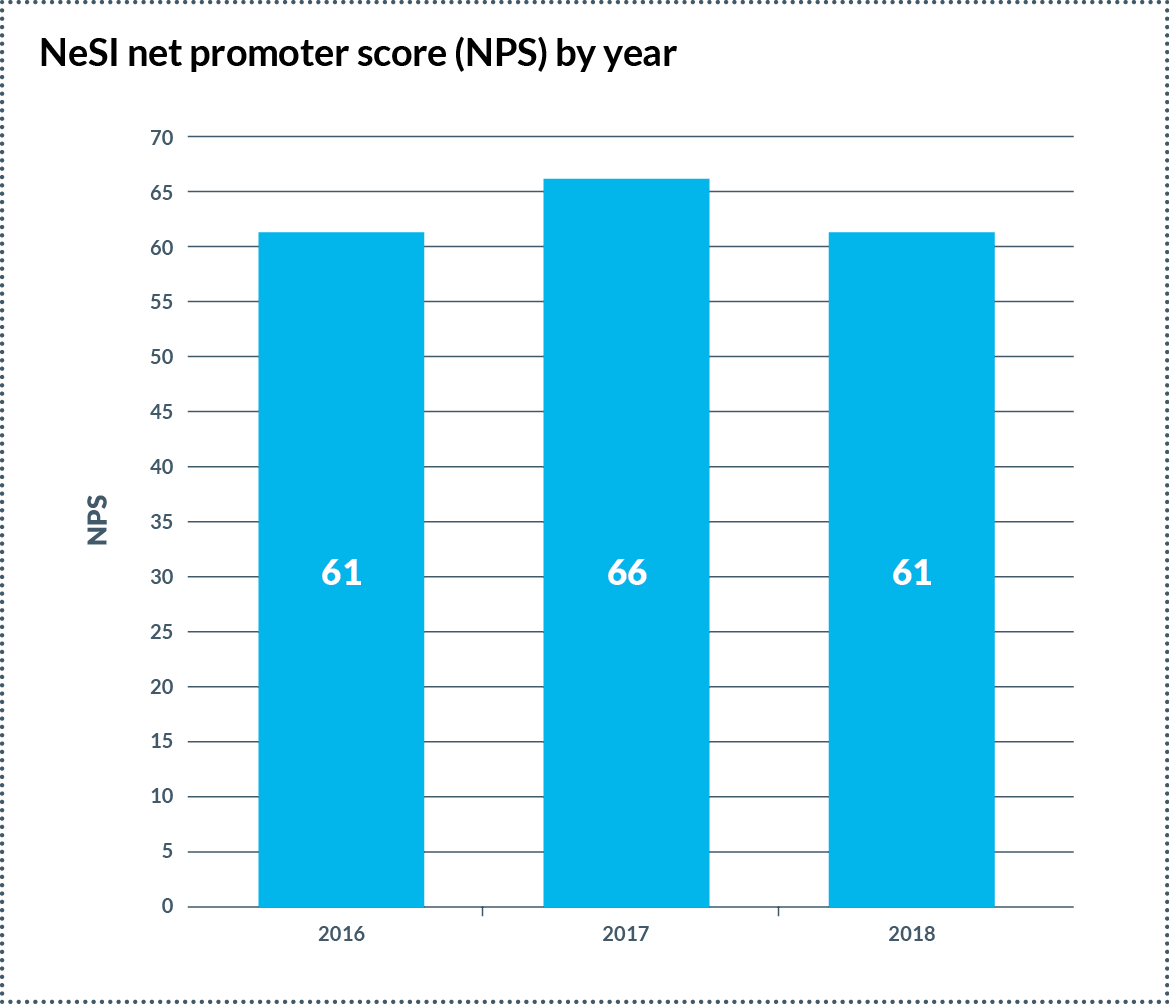