Scaling up the analysis of simulations on nanowire stability

"This has helped me to scale up my research capabilities not only with this work, but also with future endeavours too."

At the University of Auckland, Dr Kannan Ridings is using computer simulation to investigate nanowire stability at elevated temperatures. The idea is that nanowires can melt via different pathways depending on their length. Conventional wisdom states that nanowires should melt at their surface, with the liquid moving from the outside inwards to the wire centre. For nanowires whose lengths are large compared to their radii, they can melt via the growth of an instability which causes the solid to break apart.

To investigate this requires hundreds of simulations of nanowires of different radii and lengths, gathering statistics on how the crystal structure of nanowires for a given radii and length, behaves at high temperatures. Once the simulations are complete, the data generated must be processed efficiently. MATLAB scripts are used to identify the solid-liquid interface of each nanowire close to the melting point. Analysing the data from each nanowire simulation must be done multiple times for each simulation, causing the time taken on a conventional computer to process all this data to increase exponentially.

Another challenge is that the main simulation runs on the Māui supercomputer, which is designed for running large parallel jobs, while the post-processing is mostly serial and requires Matlab, which is not supported on Māui. In the past this has meant Kannan had to download intermediate results and process them on his local machine, costing more time.

NeSI Research Software Engineer Chris Scott worked with Kannan to help automate the final post-processing step, which involved running a Matlab script in each simulations directory. In order to enable the Matlab script to run without manual input, we had to infer certain parameters based on the directory name of the simulation, which was named in a structured manner.

"The help I received from Dr Chris Scott, as always, really helped save a lot of time. Providing Chris with some initial scripts that I had already written really made the process super easy, and we were able to achieve the desired results quickly. This has helped me to scale up my research capabilities not only with this work, but also with future endeavours too." 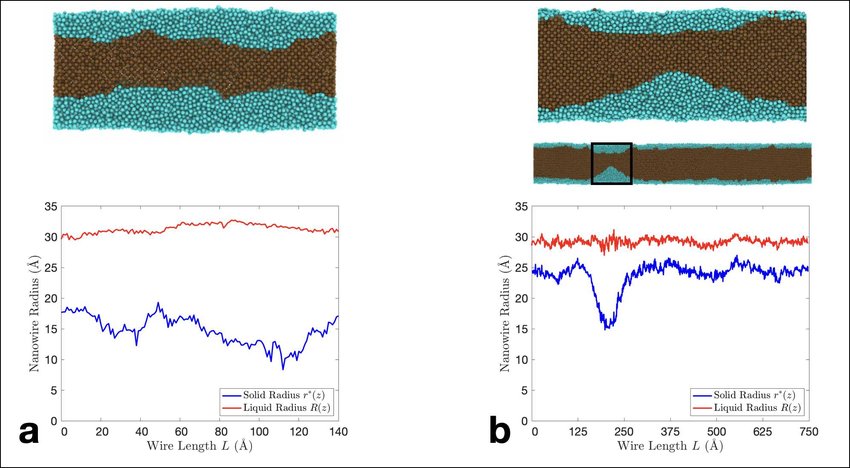 Attribution:
A plot showing the solid radius r * (z) for two surface melted nanowires both of radius R 0 ≈ 30 Å and lengths 140 and 750 Å from (a) to (b) respectively. Solid blue lines represent the radius of the solid-liquid interface, while the solid red lines indicate the liquid interface. The solid atoms are coloured brown (darker) and the liquid atoms are coloured blue (lighter). The snapshots of the nanowires in (a) and (b) are both right before the solid core breaks apart. In (a) the size of the liquid nucleus is nearly half the nanowire radius, whereas in (b) the liquid nucleus only takes up a small portion of the total nanowire radius. Figure source: Surface melting and breakup of metal nanowires: Theory and molecular dynamics simulation.

"I am grateful to the NeSI team for assisting with the compilation of the TOUGH+HYDRATE code for this research."
Subject:
Engineering