"The fact that NeSI can provide support to things like getting the code to work puts New Zealand in an amazing position worldwide.”

Within their first weeks of operation, NeSI’s new platforms are already making a big impact on how New Zealand researchers tackle challenging problems.

At the University of Otago, Dr. Annika Seppälä is a Senior Lecturer in the Department of Physics and studying the influence of solar activity on climate in the southern polar region, including in New Zealand. Access to high performance computing (HPC) resources is essential to her work.

“Without HPC access we would be unable to do any global climate simulations,” she says.

Next to HPC, her other most valuable research tool is the Community Earth System Model (CESM), a tool widely used around the world to investigate and simulate how atmospheric, ocean, land surface, carbon cycle, and other components in the climate system are connected.

Annika’s latest project explores how changes in the Sun, particularly an effect known as energetic particle precipitation or “solar wind”, influences things like ozone balance in the polar atmosphere and how that impacts other climate elements such as temperatures and winds elsewhere.

“NZ scientists hear a lot about the New Zealand Earth System Model at the moment, but the Sun-related processes that my group is investigating are not included in the NZESM model,” she says. 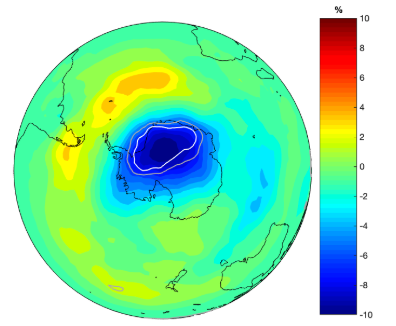 So when NeSI’s Maui platform launched, a door of opportunity opened for Annika to run the CESM on NZ’s newest supercomputer, but she needed help from NeSI’s Consultancy Team to make it happen.

“These types of models are rather complex to port, which essentially means getting the model code to work in a new environment,” she says. “I’m a physicist, not a computer scientist, so this would have been a massive task for me. So when Wolfgang Hayek from NeSI contacted me and asked if I would benefit from their expert help in porting the code in the new NeSI platforms, I was practically jumping in excitement in my office. I knew this would save months of my research time and things would be done correctly from the start.”

Working with Wolfgang, Chris Scott and Alexander Pletzer from NeSI’s Consultancy Team meant that Annika could keep her focus centred on her project, while they dealt with the technical details of getting her model properly set up on the cluster.

“I know many colleagues working in similar fields around the globe who have to make all of this work on their own and a lot of the time this means that there is a lot of guesswork going on,” she said. “We don’t know the nitty-gritty of the HPC workings, and, because of the previous point, it can take several months to make complex models work. The fact that NeSI can provide support to things like getting the code to work puts New Zealand in an amazing position worldwide.”

NeSI’s team was able to get the CESM code properly ported in a matter of weeks, and Annika has been able to get her projects up and running on the new platform fairly quickly. She even picked up some porting tips along the way, and the performance optimisations that were implemented by the team will allow her to get the most out of her HPC core-hour allocation.

“I’m especially thankful to Wolfgang for explaining things to me and making sure I understood what certain pieces of HPC terminology meant,” she says. “Thanks to this I now have confidence in actually doing code porting and testing in the future. I started referring to the team helping me as the NeSI wizards when I was describing the progress to my colleagues, because they did an amazing job and to me it seemed like magic!”

Annika and her students won’t be the only ones using the CESM on the new platforms.

“I already know there are other scientists looking forward to using the CESM model on Maui,” she said. “This project that got the model started will benefit many NZ researchers.”

Do you have a project that could use support from the NeSI Consultancy Team? NeSI consultants can assist with code optimisation, parallelisation, porting to GPUs, custom code development and many other tasks. Email support@nesi.org.nz to find out more.

“Having access to NeSI computing resources means that we can keep up with the state-of-the-art research in this area, otherwise we simply would not be able to run our code in a reasonable time.”
Subject:
Engineering