The formation of surface archaeological deposits in arid Australia

"NeSI staff developed customised shell scripts that allowed us to generate thousands of simulated populations in rapid succession on the NeSI cluster."

How does the archaeological record form?

The deposits that archaeologists study are the product of behavioural and geophysical processes, both of which operate at varying tempos over time. However, archaeological studies often emphasise the role of human behaviour, looking for signals of human activity within arrangements of artefacts and features. Geophysical and post-depositional processes are typically thought of as disturbances to signals of human behaviour, generating an incomplete record that archaeologists are tasked with reconstructing. Different deposits, depending on their contexts, are considered to be more or less informative based on impressions of degrees of preservation.

Ben Davies, at the University of Auckland, conducted a study to understand the formation dynamics of surface archaeological deposits in order to identify what kinds of patterns might be associated with different formational processes, both behavioural and geophysical.

Figure 2: A simulated distribution of stone artefacts (left) and the average accumulation of lithic cortex over distance from 100 similar simulations. Preliminary output from the simulations suggest that low levels of cortex within field assemblages are consistent with high levels of artefact transport.

Australia’s arid zone is dominated by surface scatters of stone artefacts and cooking hearths. These are notoriously difficult for archaeologists to interpret due to stratigraphic mixing caused by long term erosion, and are often incorporated into settlement models based on an exclusively behavioural model. But what these deposits lack in terms of vertical integrity is made up for by the high degree of visibility over large spatial extents. This kind of record can offer archaeologists an opportunity to understand prehistoric use of space at the landscape scale, something typically hampered by the expense and logistics of excavation. Previous research at Rutherford’s Creek in western New South Wales has produced a record of radiocarbon dates which have been obtained from ancient cooking hearths. When taken together, these records show a general trend of greater numbers of dates in the more recent past, as well as noticeable gaps in the occupation history for the area. The overall increasing trend may be consistent with an increasing population, while the gaps may be explainable as human absence or the effects of dispersal and congregation. Both of these patterns, however, may also be consistent with differential preservation rather than any particular activity set. Furthermore, there is some evidence to suggest that people in the past were regularly carrying away stone artefacts in fairly large numbers. This is seen in the low amount of cortex (the outer weathered surface of stone nodules) found in archaeological assemblages, indicating that the mobility of the people who manufactured the artefacts was high as cortical pieces are taken away. The spatial areas covered by the archaeological assessments, however, are small in comparison with the probable space being utilised in the past, and it is not known how different land use schemes might produce different patterning at the local scale.

To assess these issues, we constructed a set of agent-based computer simulations to evaluate the distribution of archaeological remains in space, and how general patterns of erosion and deposition through time might affect the character of surface deposits.

Spatial simulations were developed using the NetLogo software package. The first set simulates the changing visibility of surface deposits by modelling the erosion and deposition of surface sediments alongside the construction of cooking hearths. Hearths are constructed by programmed agents at a given rate, and these become hidden, visible, or destroyed by sequences of geomorphic events. At the end of the simulation, the resultant distribution of surface hearths are sampled and compared with field data. The second set of simulations resamples a database of stone artefacts made in a laboratory, and simulates their dispersal using different mechanisms (random walks, correlated walks, etc.). A GIS extension allows the simulations to be run in a spatial environment analogous to Rutherford’s Creek, using different landscape features (lakes, creeks, etc.) as attractors for human occupation.

The data and code were then uploaded to the NeSI cluster, where batches of controlled experiments were automated using a customised shell script developed with the help of NeSI staff. The simulations disperse millions of artefacts in less than an hour, and generate thousands of simulated populations of radiocarbon dates in rapid succession according to different geomorphic models. Once these reach densities comparable with those recorded in the field, the results are returned from the cluster, sampled appropriately, and compared to those obtained from Rutherford’s Creek. Without the speed of the NeSI cluster and the experiment automation devised by the NeSI staff, this would be a slow and gruelling procedure. 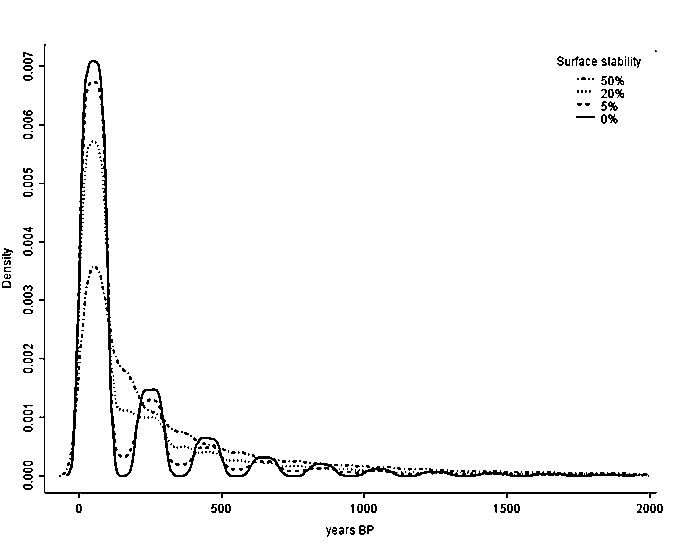 Preliminary results from this study suggest that the patterns in stone artefact assemblages and hearths are more consistent with explanations that include high levels of mobility among human groups. Changes in the levels of cortex among recorded stone tool assemblages are parsimonious with repeated, short-term occupation with little redundancy in place use. Additionally, modelling the formation of the radiocarbon record indicates that both the increasing trend in radiocarbon dates and gaps seen in the record may be consistent with large scale erosion and deposition events. These simulations can be used to develop field tests which may help to differentiate between erosion-driven gaps and those associated with human absence. This kind of insight is important for the development of informed heritage management policy as well as for developing a better understanding of the human past.

“Synthetic lethality is an interaction between two genes where only inactivation of both genes kills a cell or organism.”
Subject:
Medical Science