“Without computational resources such as the Pan cluster at NeSI, we would be unable to use accurate, yet computationally demanding, predictive methods such as Large Eddy Simulation."

As any experienced seafarer knows, good aerodynamics is the key to smooth sailing. In order to improve the design of sails, hulls, and masts, we need to better understand the properties of sail aerodynamics in a range of conditions.

At the University of Auckland, Stefano Nava, Stuart Norris and John Cater in the Faculty of Engineering are using NeSI computing resources to study the aerodynamics of high performance yachts.

“The fluid dynamics that characterises sailing yachts is extremely complex, due to the fact that the yacht is partly immersed in water and partly in air, with the flow being three-dimensional and turbulent,” the group notes in their latest paper, published in the International Journal of Heat and Fluid Flow. “Experimental and numerical studies have created a large body of knowledge of the physics of the problem, but at the same time have highlighted the limits to the predictive methodologies available for designers.” 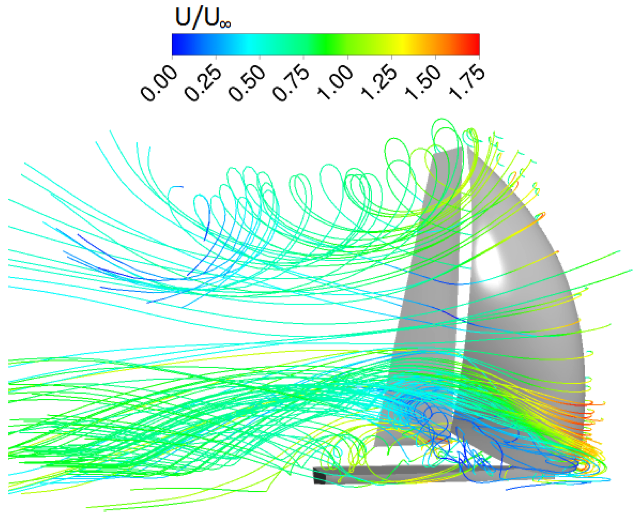 Attribution:
Fig. 1: Velocity streamlines of the time averaged flow around the yacht model.

Their paper compared two methods for modelling turbulent flow – Large Eddy Simulation (LES) and Reynolds Averaged Navier-Stokes (RANS) – to see if the extra computational resources required for the first method would enable a more accurate prediction of the aerodynamics of upwind sailing.

At first, the computational demands involved with this project posed a challenge. Complications with both the hardware and software components for their simulations led to performance issues and long wait times for results.

Jordi Blasco, a member of NeSI’s Solutions Team, stepped in to help. First, he created a short-term reservation on NeSI’s Pan cluster to provide a dedicated set of resources. He then found ways to improve the performance of simulation software Nava was using and the resilience of his workflow.

As a result, Nava’s computations were nearly five times more efficient and used less resources than expected, which freed up computational time on Pan for others.

“Given that Stefano had already spent weeks of computing hours on this project, the 500% efficiency improvement meant a lot, not only for him but for other users of the Pan cluster as well,” said Blasco.

Thanks to these adjustments, Nava was able to compute and collect the results he needed. The simulations were compared with experimental data previously gathered in the wind tunnels of the University of Auckland’s Aerodynamics Laboratory. 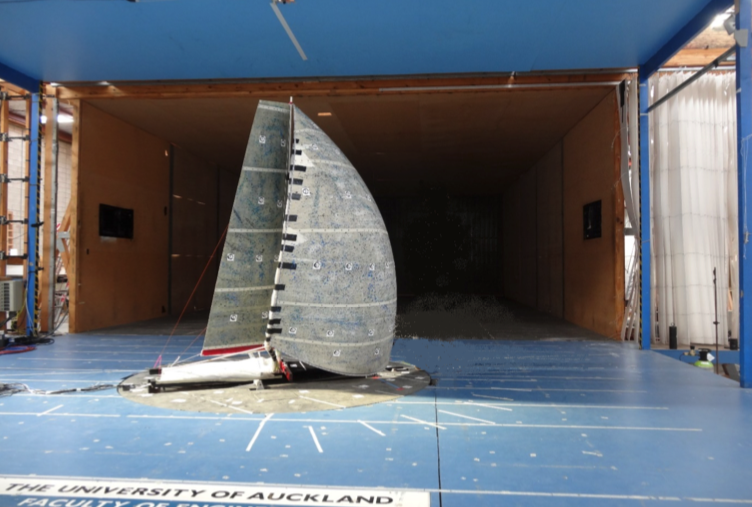 Attribution:
University of Auckland wind tunnel set up for a downwind sailing experiment.

Ultimately, when they compared the LES and RANS results with their experimental data, they found the LES model’s capabilities to be superior.

“In both cases the LES model has been shown to be able to predict the correct pressure distribution for this separated flow, while the RANS simulations shows less accurate results,” their paper stated.

These results add to the growing body of work studying yacht aerodynamics. The researchers are continuing their study into the more demanding case of modelling downwind sails such as spinnakers, to be presented at the INNOV’SAIL conference this June in Lorient, France. Organised by the Cité de la Voile Eric Tabarly and the French Naval Academy Research Institute, INNOV’SAIL is an international forum for the presentation and discussion of the latest scientific and technologic research and its application in the field of high performance yachts and competitive sailing.

“Access to supercomputing resources is critical to advancing this field of study,” says Norris. “Without computational resources such as the Pan cluster at NeSI, we would be unable to use accurate, yet computationally demanding, predictive methods such as Large Eddy Simulation. It is currently not possible to use the methods on a desktop computer, due to their large CPU and memory requirements. The use of the methods enables a better understanding of the flow around yacht sails, enabling the design of faster yacht sails.”

“Without a doubt, we would not have been able to undertake the development work for this project as quickly or efficiently without the support from NeSI.”
Subject:
Chemistry