​Understanding the rupture process of the Kaikoura earthquake

“Without NeSI’s supercomputer, we cannot run the software with a sufficient resolution for the research problem.”

What triggers severe earthquake ground shaking? And when a large earthquake hits, what changes does it cause in surrounding areas?

Using deterministic, physics-based models and a NeSI supercomputer, GNS Seismologist Dr. Yoshi Kaneko and his collaborators are recreating earthquake events to try and answer those and other important questions about earthquake rupture processes and aftermath effects.

In particular, they’ve been looking at the 7.8 magnitude earthquake that struck Kaikōura in 2016, the country’s biggest quake since 2011 when Christchurch was struck by a 6.3 magnitude event.

With help from Alex Pletzer from NeSI's computational science team, Dr. Kaneko has used an advanced 3D wave propagation code on NeSI supercomputing resources to simulate and understand the quake’s rupture process as well as corresponding ground motions and stress changes in the Earth’s crust.

“The results of our studies have helped us understand the complex Kaikōura quake and better prepare for the next large earthquake in New Zealand,” says Dr. Kaneko. “Without NeSI’s supercomputer, we cannot run the software with a sufficient resolution for the research problem.”

Part of what made the Kaikōura earthquake so complex is that it not only generated large ground motions and resulted in multiple onshore and offshore fault ruptures, it also caused a profusion of triggered landslides and a regional tsunami.

In his study, Dr Kaneko and his colleagues examined the rupture evolution based on analysis of local seismic and GPS (Global Positioning System) data, combined with numerical simulations of seismic wave propagation.

Their models demonstrate a complex pattern of slowly propagating rupture from the south to north, with over half of the seismic energy release occurring in the northern source region, mostly on the Kekerengu fault, 60 seconds after the origin time. These results  have illuminated the details of the rupture progression and corresponding ground motions throughout New Zealand (visible in the video below). They were published in Geophysical Research Letters in October 2017.

In a separate study, Dr Kaneko and his colleagues used the same simulation approach to interpret the cause of widespread slow slip events – gradual fault movement that can last days to months – following the Kaikōura quake.

This time, one of the most intriguing observations was that the Kaikōura quake triggered slow slip events off the Gisborne coast, up to 600 km away from its epicentre in North Canterbury (Figure 1 below). 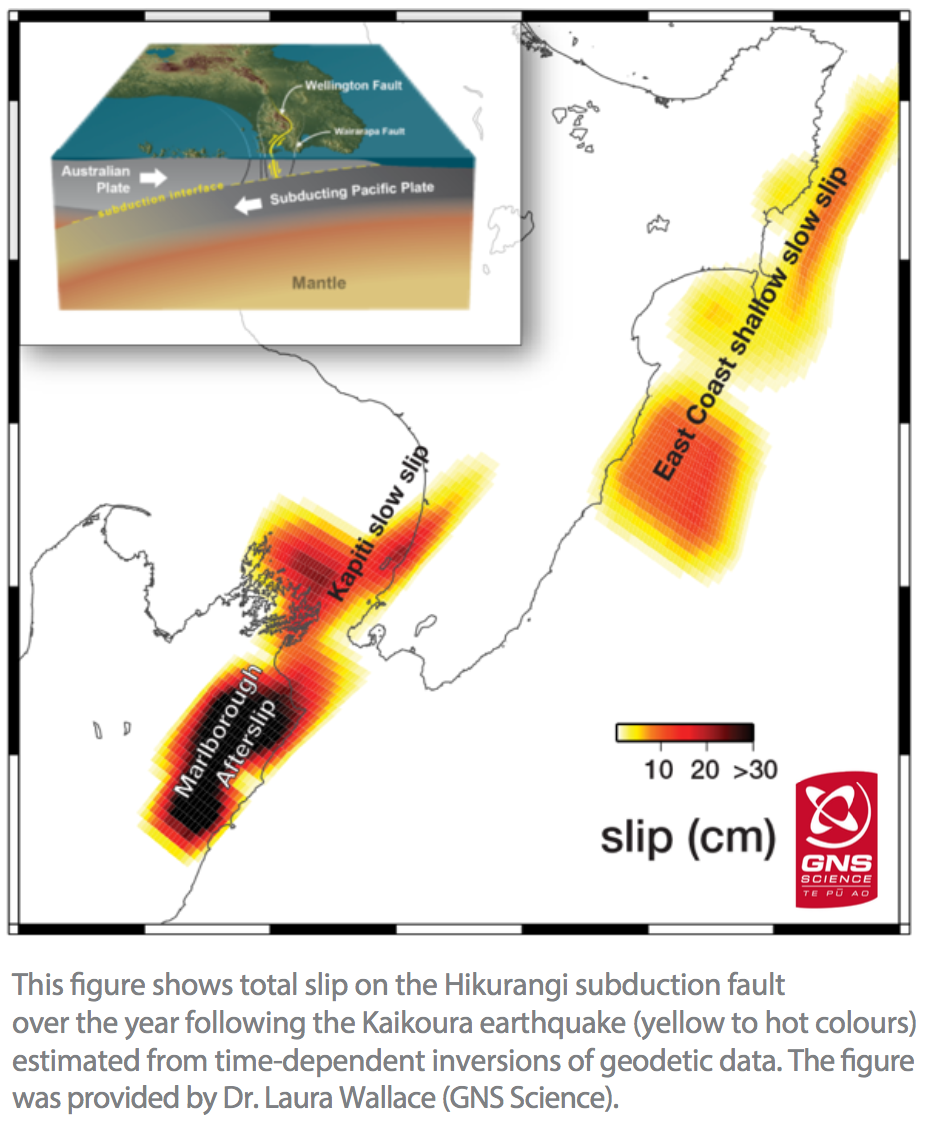 Numerical simulations were used to estimate stress changes in the Earth’s crust during the passage of the Kaikōura earthquake waves (Figure 2 below). 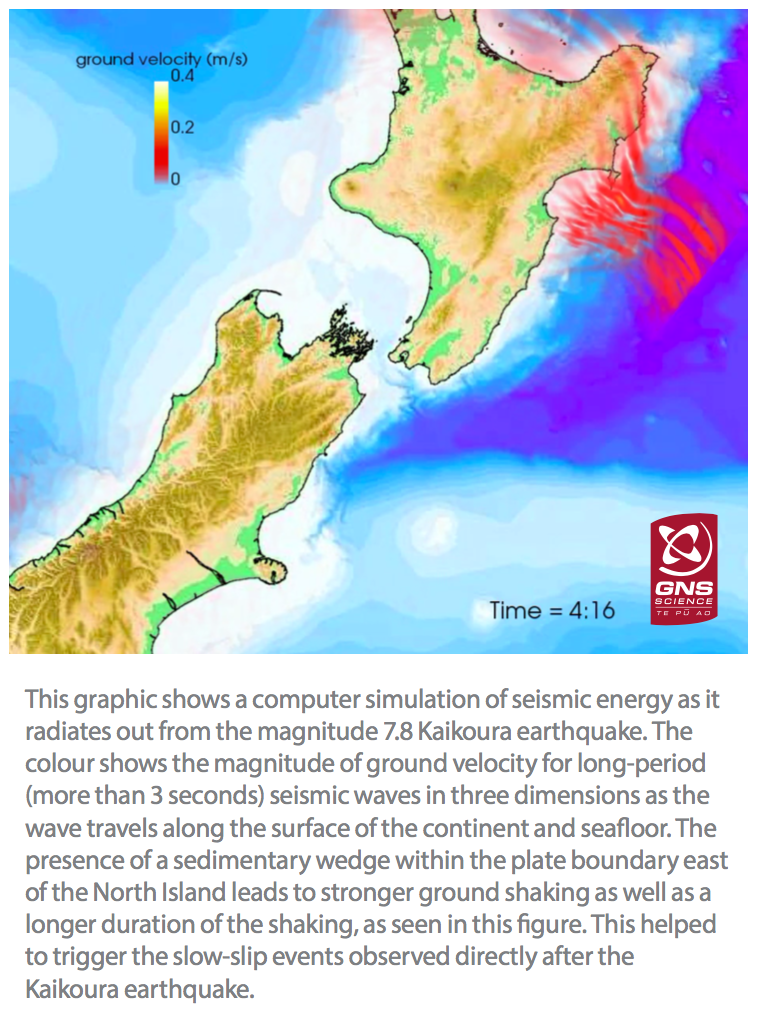 “Our results suggest that the slow slip was triggered by stress changes in the Earth’s crust caused by passing seismic waves from the Kaikōura quake,” says Dr. Kaneko. “We further show that the triggering effect was likely accentuated by an offshore ‘sedimentary wedge’-- a mass of sedimentary rock piled up at the edge of the subduction zone boundary under the seafloor off the North Island’s east coast.”

These results also show that layers of more compliant rock is particularly susceptible to trapping seismic energy, which in turn, promotes fault slip at the base of the sedimentary wedge where the slow-slip events occur. These findings were published in Nature Geoscience in September 2017.

As modelling techniques evolve and computing performance improves to make earthquake simulations more realistic and informative, Dr. Kaneko will continue to rely on NeSI’s supercomputing resources as an essential tool for his research.

"I appreciate the NeSI staff’s assistance in helping me move to NeSI's Cray XC50 supercomputer and achieving this significant boost in productivity."
Subject:
Earth Science