"Our goal is to create a piece of software that is capable of automatically analysing hundreds of thousands of pupil-tracked coordinates. This would allow a clinician to interpret the results and guide clinical decision making in real-world practice."

The Challenge:
Repeated concussions can have long-term adverse effects of chronic neurological impairment and neurodegenerative disease.

The Solution:
University of Auckland researcher Dr. Matthew McDonald and his team are developing a portable, low-cost, concussion detection tool. Working with NeSI Data Science Engineer Dr. Maxime Rio, they're exploring ways to automate the analysis of eye tracking software so that a non-data scientist / programmer (e.g. a clinician or physiotherapist) can interpret the results.

The Outcome:
Currently there is no rapidly available marker to indicate when the brain has recovered from a state of vulnerability. Development of an objective concussion biomarker could help guide clinical decision making in real-world practice to mitigate the effects of repeated concussion and improve the lives of patients.

Mild traumatic brain injury (mTBI) remains an unmet health need for both diagnosis and rehabilitation. Concussion is a form of mTBI characterised by the World Health Organisation (WHO) as a neurobehavioural phenomenon (functional rather than structural disruption to brain tissue) caused by external physical forces (i.e. trauma) with no penetrating head injury [1].

This has major health significance because concussion is recognised as a leading cause of disability worldwide with significant health and economic consequences. In fact, half the world’s population is expected to experience a form of head injury during their lifetime [2]. Each year 50 million people suffer from a concussion (at least 6 per 1,000 globally) and persistent post-concussive symptoms are common [2, 3].

Dr. Matthew McDonald is part of a research team that is working to develop an easy and robust clinical biomarker (i.e. an objective tool for clinicians) that identifies when a person recovers from concussion or traumatic brain injury. The team includes researchers from the University of Auckland's Department of Ophthalmology, the Mātai Medical Research Institute, and the Health Research Council of New Zealand (HRC).

Of particular concern are repeated concussions which have long-term adverse effects of chronic neurological impairment and neurodegenerative disease.

"The brain is particularly susceptible if the repeated concussion occurs prior to the brain having recovered from the initial concussion – a period recognised as increased cerebral vulnerability, especially in athletes playing collision sports," says Matthew. "Safe return to sport for athletic concussion patients is key to prevent a secondary injury known as ‘second-hit syndrome’ where permanent brain damage results from repeated head trauma."

Currently there is no rapidly available marker to indicate when the brain has recovered from this state of vulnerability. An objective concussion biomarker could be used to guide medical decisions to mitigate the effects of repeated concussion.

Evidence has clearly demonstrated that eye-tracking abnormalities are present in patients with concussion [4, 5] (Fig. 1). This is because eye movements require the complex integration of multiple brain networks.

So, Matthew and his team are aiming to develop a portable eye-tracking programme for the rapid detection of concussion. This will be validated against their novel suite of MRI methods that can detect structural and physiological changes in concussion (Fig. 1-2). 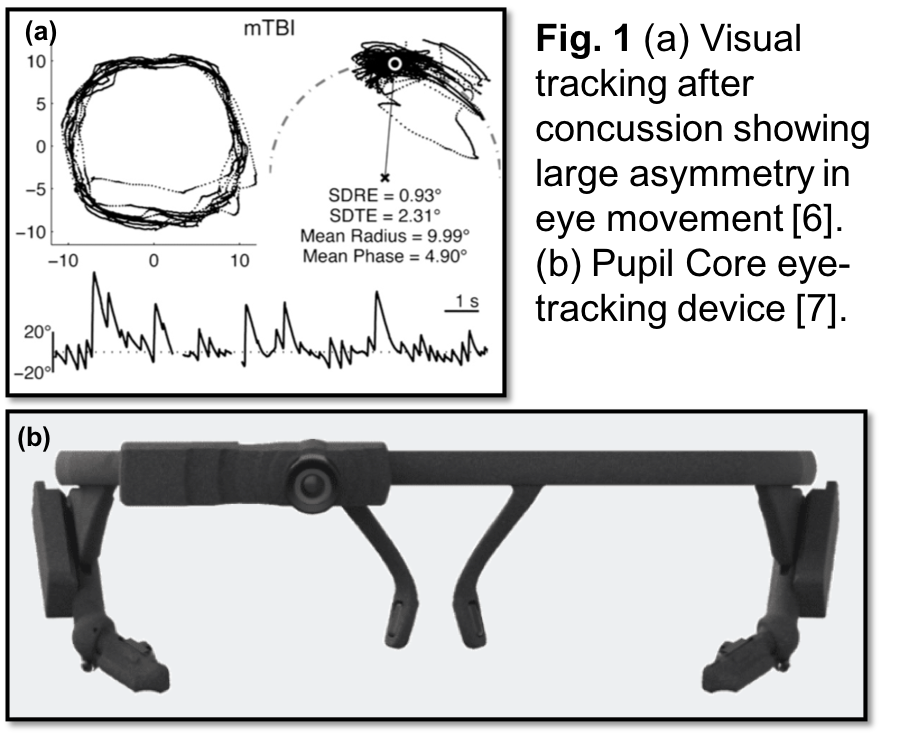 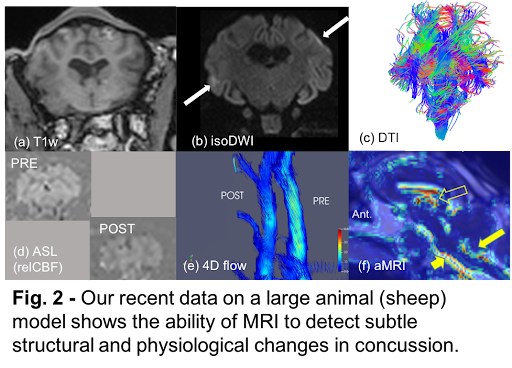 As part of their approach, the team acquired an open-source, 3D-printed pair of eye tracking spectacles which were capable of tracking the eyes at 200 frames per second (two backward facing infrared cameras). 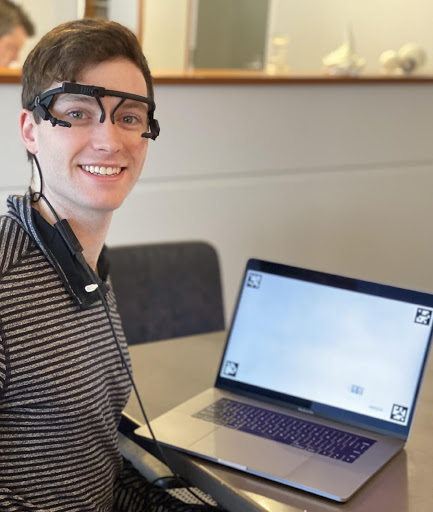 "This was key to assess the participant’s accuracy of eye movements and to understand where they were looking," says Matthew. The initial challenge was designing an experimental protocol (i.e. laptop-based animation the participant follows with their eyes) that was capable of communicating with the eye tracking device to reveal the ‘ground truth’ coordinates of the experimental stimulus. There is a ‘world camera’ which faces away from the participant toward the screen, capable of translating the pupil-tracked coordinates to ‘world’ gaze coordinates.

The second challenge remains the most significant: automated analysis of the eye tracking coordinates in a clinically significant manner.

"Our goal is to create a piece of software that is capable of automatically analysing hundreds of thousands of pupil-tracked coordinates," says Matthew. "This would allow a non-data scientist or programmer, such as a clinician or physiotherapist, to interpret the results and guide clinical decision making in real-world practice."

At this point, they approached NeSI and began working with Dr. Maxime Rio, a Data Science Engineer. Maxime was able to join their team through NeSI's Consultancy Service, which embeds NeSI Data Science and/or Research Software Engineers into a research group for a period of time to help lift their capabilities.

The eye tracking protocol and analysis script is a sophisticated piece of work that not only works in a concussion cohort, but for other conditions (and research applications) such as neuromuscular disorders (e.g. myasthenia gravis) due to its precise measurement of clinically significant (and objective) oculomotor (eye movement) measures.

As a result of the first phase of this project, the eye tracking software produces synchronized X and Y coordinates for gaze and target data at 200 Hz. During the protocol, different tasks are recorded and the research team has developed a “biomarkers_extract” script which quantifies physiological characteristics of patients to great precision (Phase 2). Phase 2 required Maxime's expertise in signal processing, algorithm conversion / implementation, and subsequent script automation.

"Maxime has been an imperative member of our team," says Matthew. "Every meeting with him is followed by meticulous note keeping and action plans which are always implemented to a high standard. Maxime is not only an incredibly gifted data scientist and programmer, but he is a patient teacher and problem-solver. We are currently 80% of the way through Phase 2 and the progress is exciting!"

In addition to tapping into Maxime's expertise, Matthew's team has also benefited from accessing NeSI infrastructure such as the Data Transfer Platform (which leverages Globus), storage capabilities, and remote processing power for MRI analysis.

Currently, Matthew and his colleagues' biomarker technology is being implemented on a large three-arm patient trial.

The first cohort is a team of 40 community rugby players (age 15-17) who have recently undergone the world’s most complete advanced neuroimaging protocol in mTBI (12 sequences over 1.5 hours) pre-season and mid-season (along with the eye tracking protocol we have built). Their post-season scans and eye tracking time points are due in August.

The second cohort consists of a longitudinal study of 30 acute concussion patients from emergency departments (with age-matched controls) who will receive MRI and eye tracking at 48 hours, 2 weeks, 6 weeks, 3 months, and 6 months. The advanced MRI protocol is intended to validate the team's eye tracking findings to enable the future use of eye tracking without any neuroimaging required. Matthew and his colleagues will use the eye tracking coordinates to reverse engineer any functional/ structural brain abnormalities.

Lastly, the third cohort consists of 40 patients with ongoing symptoms following a historic mTBI (6-months to 2 years prior). The aim here is to determine whether or not the changes found in the acute mTBI patient persist in this ‘ongoing symptom burden’ cohort.

"We believe the findings of these studies will be of international significance," says Matthew. "Working with Maxime and NeSI has been an absolute pleasure and as we move forward into future phases of our work, we would be thrilled to continue working with them."

This ongoing work, supported by NeSI's data science expertise and computational research infrastructure, moves the team even closer to their ultimate goal of designing and implementing a portable, low-cost, concussion detection tool. That could help guide clinical decision-making to mitigate the effects of repeated concussion, which holds great potential for improving the lives of patients.

To learn more about Matthew and his team's project, check out this interview featured in Tech Week 2021. 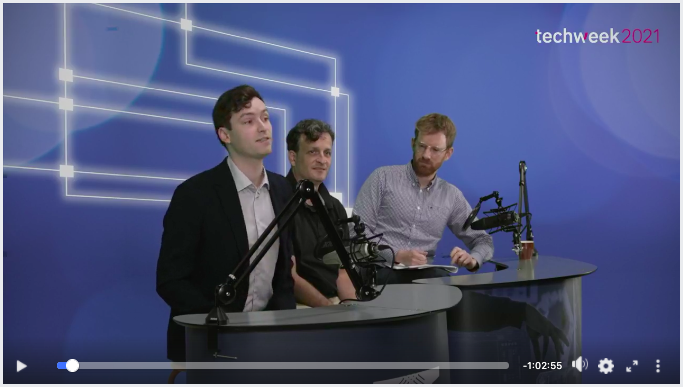 Do you have an example of how NeSI support or platforms have supported your work? We’re always looking for projects to feature as a case study. Get in touch by emailing support@nesi.org.nz.

"We needed high-performance computing to run model simulations for a decade-long at this resolution, so NeSI has been vital in that respect."